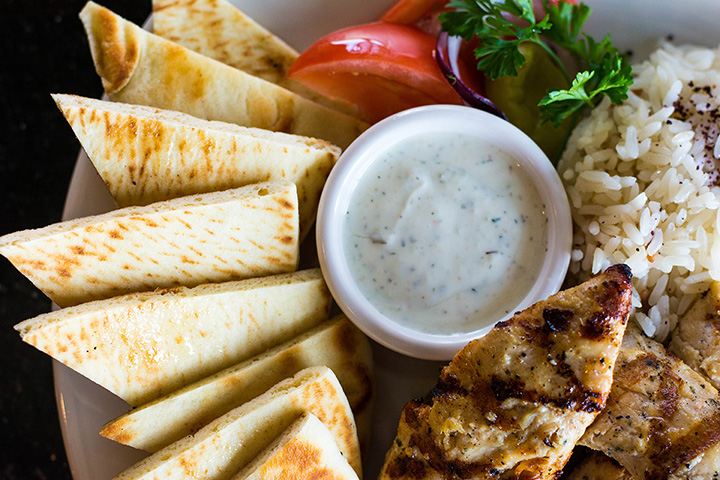 There's an undeniable spirit of joy about a Greek restaurant. A celebration of food, family, and the simple pleasures of life, a good Greek restaurant will make you feel welcome whether you're all alone or with all your family. So, grab a chair and prepare for a good feeding at the best Greek restaurants in Michigan.

D'Nicio's Parlour in Kalamazoo represents one of Kalamazoo's best Greek restaurants, which is quite a feat in a town that's got several such entities. D'Nicio's starts with some of the best in American fare—burgers, ice cream and koney dogs—but steps it up to the ever-popular gyro and other Greek specialties like mousaka, pastitsio, and even soganaki. So whether you're looking for something new, familiar, or even familiar done a whole new way, D'Nicio's is waiting for you.

Pegasus Tavernas has a unique claim to fame: it was there back when “Greektown” used to be called “Trapper's Alley.” It's been in place for nearly a quarter of a century, delivering some of the best Greek food around. Saganaki, scordalia, taramosalata, dolmathes, and more line the menu here, and there's plenty more besides featuring chicken, beef, lamb, veal and more. Even the desserts are heavily Greek-influenced, like rizogalo, loukoumades, and even pagoto, which is basically just ice cream.

Estia—with locations in Troy and Warren—features “Greek street food,” offering up pitas and bowls for those who want Greek food fast. A lot of this is actually build-your-own style, where you pick how it's presented, what the meat is, and any extras you'd like. Throw in some soups and sides, a little dessert, and you're ready to go. Best of all, there's a GrubHub connection so you can even get it delivered when you don't want to go out.

KouZina, with locations in Ann Arbor and Royal Oak, delivers its own particular brand of Greek street food. Greek salad, gyros in both bowl and pita, and even some bougatsa for dessert, the end result is a fast, friendly Greek experience that should leave everyone happy.

A post shared by OaklandCountyFoodie (@oaklandcountyfoodie) on Jul 7, 2017 at 7:40am PDT

Greek Pantheon Restaurant has been around since 2004. A truly family-style affair—it promises dishes “made to eat, not admire”—it even promises the best chicken lemon rice soup around. With a new menu in place, including lamb shank, gyros, stuffed grape leaves, mousakka and plenty more, it's going to give you a taste of authentic Greek fare served with plenty of Greek flair.

Ecorse's The Auburn Cafe offers up a comparatively unique entry for us to consider: Greek tavern-style food. If the thought of eating bar food leaves you a little cold, then wait until you see what's available on the Featuring several familiar dishes like saganaki, gyros, and the avgolemono—lemon rice soup—you'll find plenty to eat here as well. With dine-in, pick-up and delivery options all on hand, you'll even be able to have that Greek tavern food just the way you like it.

The phrase “Greek diner” may sound like a bit of a contradiction, or perhaps just a big non sequitur, but Auburn Hills' Spargo's will deliver on that unusual premise with a will. When even breakfast gets a little Greek—like the gyro omelette and the Greek equivalent—you know you're in for something unusual. But toss it up a bit with kabobs, gyros, spanakopita and several other options, and you've got the potential for Greek fare morning, noon and night.