In early 2006, a small group had a vision of creating a children’s museum.  On October 25, 2006, Sandcastles, A Lake Michigan Children’s Museum, was established with a board of 6 members who applied for non-profit status. In February 2007, the board held a public meeting to explain its vision and encourage others to get involved. In March, the first exhibit, Help Us Build The Museum, went on display at the Family AfFair. In June, Sandcastles opened for its first summer on South James Street. We held a Summer Science Camp and sponsored activities at Friday Night Lives, the Mason County Fair, and Oktoberfest.

In June, 2008, Sandcastles opened for its second summer with a new theme, Michigan Wildlife, featuring a giant interactive treehouse with a puppet theater, a Pere Marquette River water table, an interactive apple tree, 20 Discovery Tubs, and an infant section. Special programs were offered on Thrilling Thursdays, and Wildlife Rescue, a ew traveling exhibit, was featured at Friday Night Lives. Attendance averaged 1,500 each month. The museum was also available for use for birthday parties, field trips, and other special events.

In 2009 Sandcastles moved to a much larger location on West Ludington Avenue, and that made us much more visible. Excellent coverage by local media also spread the word about the museum. Official attendance for the 2009 summer season  was 12,645! Munchkin Mondays were added for preschool programming, and Thrilling Thursdays focused on school-aged children. The new theme was Our Neighborhood, and new exhibits included a grocery store, ice cream shop, post office, sailboat, and bubble table. Due to many requests, the museum was open on Fridays and Saturdays from 9:30 a.m. to 1:00 p.m. through December 19.

The 2010 season brought many changes. Our theme exhibit was Grandpa’s Farm, complete with chickens and eggs, a milkable cow, other animals, a vegetable garden, a conveyer belt and silo, a large farm truck, and tractors. Another new exhibit was the Badger PlayShip, donated by Don and Bobbie Clingan. We also had a new, larger Pere Marquette River water table. Added to Our Neighborhood was a bank built by Home Depot employees with donated materials. The Art Center was in a new location, and there were new easels donated by the Pentwater Toy Box. There was a full schedule of Munchkin Monday and Thrilling Thursday programming, and we participated in Friday Night Live with outdoor exhibits. Sandcastles was open on Friday and Saturday mornings through early afternoons with special programs for preschoolers (Playgroup Fridays) and school-age children (Super Saturdays).In 2010 we had 4 part-time employees – a manager and 3 staff members. Attendance for 2010 was over 15,000!

In November 2010, the Sandcastles Board purchased the former Elks building, a lovely historical site in a prime location in downtown Ludington. From closing through spring of 2011, over 125 wonderful, hard-working volunteers worked to renovate and update the building for an early May opening. The Board also entered into a capital campaign to raise $300,000 to complete the purchase, pay for materials and necessary paid labor for renovations, and update building systems.

The 2011 season was an outstanding success. Children and families raved about our building. We had two new exhibits - an interactive, electronic SMART Table and a Vortex Wishing Well. We debuted our fantastic nutcracker collection, donated by former Ludington resident and teacher Doug Wilson. We joined the New Year's Eve festivities with a party for families at the museum. Our attendance for 2011 was over 20,000.

In 2012 we added a bouldering wall (horizontal climbing wall), a saltwater fish tank, and a construction zone. We opened for a week during local spring break and stayed open for weekend hours after that. Many classes from area schools held their spring field trips at Sandcastles. In August, Kristin Korendyke left her position as Board President to become our Executive Director. Attendance again topped 20,000.

As 2013 began, we were busy building, installing, and decorating our major new exhibit, Take Flight!  In addition to the real airplane, control tower, baggage loader, hangar, and customs, we added two destinations:  Egypt and the Amazon.  A large dollhouse was another new exhibit, and we added to our saltwater tank. We opened for local spring break on March 22 and were then open weekend hours until the summer season began on June 7. We stayed open through Christmas break and again celebrated New Year's Eve with a special balloon drop.  Attendance again topped 20,000.

In 2014, we opened for weekends in February and March and for two weeks for spring break.  We continued weekend hours until we opened for the summer in early June. Thanks to a grant from the Paine Foundation, every Head Start and Great Start child and a parent were entitled to a free visit in 2014 or 2015, and most programs have already taken advantage of the offer. We have set a new one-day attendance record with 818 and a new annual attendance record with over 23,000. Fall hours will continue until January 3 when we will close until spring break 2015.

We have an 8 member volunteer board and more than 100 volunteers who work at the museum, build exhibits, and assist with record-keeping, maintenance of exhibits, and programming. Each year we also apply for grants that match our current plans and hold fund-raisers to help us realize our long-term goals and capital projects.

Sandcastles Children's Museum is not affiliated with AmericanTowns Media 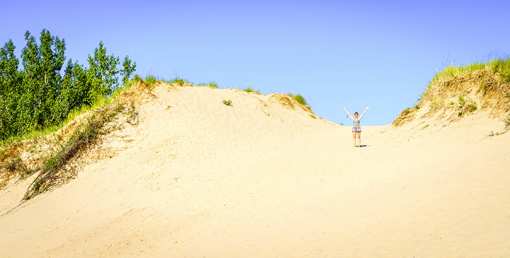 Pho, a delicious noodle soup that always provides a refreshing flavor, is a Vietnamese specialty. Across Michigan, you’ll discover an abundance of authentic Vietnamese eateries serving up pho… Read More
Show More
Select a Michigan town to find
the Best Things-To-Do and Places To Go around you