The 10 Best BBQ Joints in Michigan! 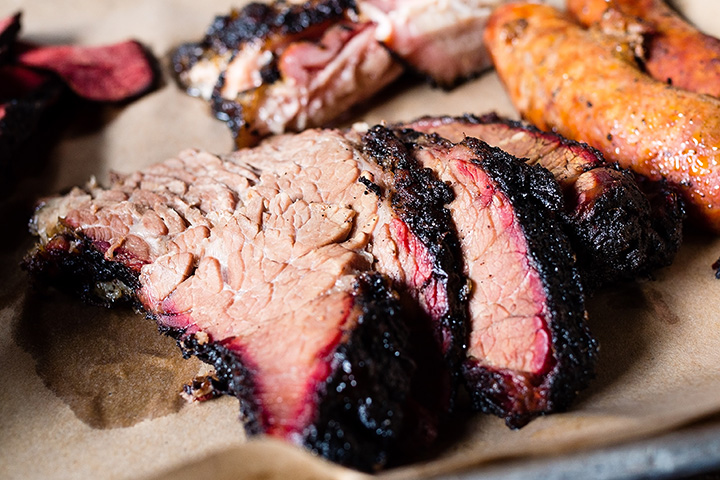 Barbecue is an American tradition that goes back decades, even centuries. While it's done in dozens of different ways, using different meats, sauces, and preparation techniques, most have come to enjoy this informal, often messy style of dining. So where can you find great barbecue in Michigan? Shockingly, that's less difficult than you might think; Michigan has a host of options in barbecue, so it's time to grab a bib and settle in, because here are 10 great options for barbecue in Michigan!

With a name like that, you might think we’ve gone to the wrong state, but West Texas Barbecue Co., can be found in Jackson. West Texas favors some of the standards in barbecue preparation, including a strict adherence to “low and slow” cooking methods using only oak and hickory wood fires. The menu, meanwhile, boasts some staggering options including sides served by the pound, prime rib sandwiches—though that's a Friday-only matter—and catering options for those who want a big meal.

Barrett's Smokehouse in Kalamazoo—and in its immediate suburb Portage—is all about the meat. Whether you want a taste of standard barbecue fare like brisket, ribs or sausage, or a shot of the sweetest of smoked meats—jerky in various flavors—you'll be able to find it all right here. Deer hunters particularly love this place as it will not only render down a catch, but also smoke the meat. Throw in an array of sides, from the standard coleslaw to the unexpected pea and bacon salad, and you've got everything you need in one package.

With several locations throughout Michigan—including New Baltimore and Clinton, Orion, and Shelby Townships—Bad Brad's BBQ offers the “low and slow” barbecue technique prized by barbecue connoisseurs. Using a combination of fruit wood and hickory smoke, Bad Brad's will turn everything from pork shoulder to beef brisket to a smoky, delicious mass of food joy. Throw in sides from chili-cheese grits to a house-branded pit bean side and you'll have a complete, belt-shattering meal afoot.

Detroit barbecue? Don't scoff—one of the kings of barbecue in Michigan is Slows. Its sandwich known as the Yardbird actually took second place in the “Best Sandwich in America” competition staged by “Man v. Food” at last report, and the Reason sandwich—smoked pork butt with coleslaw and pickle—has been considered the sandwich that “started it all.” You can check out Slows in a variety of other shops including Grand Rapids and Pontiac, and the shop features a variety of sauces for purchase to go.

Want a little intrigue with your barbecue? If so, head to Clarkston and the Union Woodshop, home of a macaroni and cheese recipe so good that rival businesses attempted to steal the recipe in a story that actually made the Wall Street Journal. There's a lot more here than mac and cheese good enough to possibly steal, though, as offerings start with appetizers like smoked shrimp salsa and work all the way up to Kansas City-cut spare ribs.

Battle Creek's FireKeepers Casino boasts its own barbecue joint. Known as Smoke ‘N Fire, the restaurant is open not only for lunch and dinner, but also for breakfast, making it possible to eat three square meals' worth of barbecue in a day. With dinner ranging from the simple Smoke Burger to the Wet-Mopped St. Louis Ribs and a brisket so good the chef considers it his favorite, at last report, you'll find plenty waiting for you here.

US 31 in Muskegon offers what many consider some of the state's best barbecue. Home to absolutely staggering sandwiches, as well as plates that will combine beef, pork and ham in any combination you like—up to and including all three at once—US 31 delivers potent barbecue options to the smoked-meat-hungry out there. Throw in an atmosphere that looks more like an old-style diner than anything else, and US 31 will make itself a must-try.

“Chicken, pork, brisket, ribs.” That's the no-nonsense starter to Satchel's BBQ in Ann Arbor, which also gives you an excellent idea of what's on hand at Satchel's. Served on tables covered in thoroughly picnic-style checkered cloth and including such noteworthy sides as beans and rice, potato salad and collard greens, Satchel's will do whatever it can to deliver top-notch, highly authentic barbecue. Throw in the larger party orders—like three pounds of meat with three quarts of sides—and that added versatility only makes things better.

Sparks BBQ prides itself on authenticity and a 100 percent wood-powered smoker. Founded by Pitmaster Dean Sparks, Sparks BBQ is actually an ascended extra of sorts. Originally starting life as a food truck, Sparks BBQ became a full restaurant after frequent requests from the community for a mobile, more frequently open operation.

To get here, you're going to have to go all the way to Eagle River, which is about as far north as you can get in Michigan while keeping your feet dry. The Fitzgerald is known for its craft beer, its whisky selection, and its traditional barbecue selections. Throw in the fact that it's got an attached hotel—great for those who happen to enjoy the beer and whisky a bit too much to drive safely—and dinner at the Fitzgerald can turn into a complete experience.