The 8 Best Burgers in Michigan! 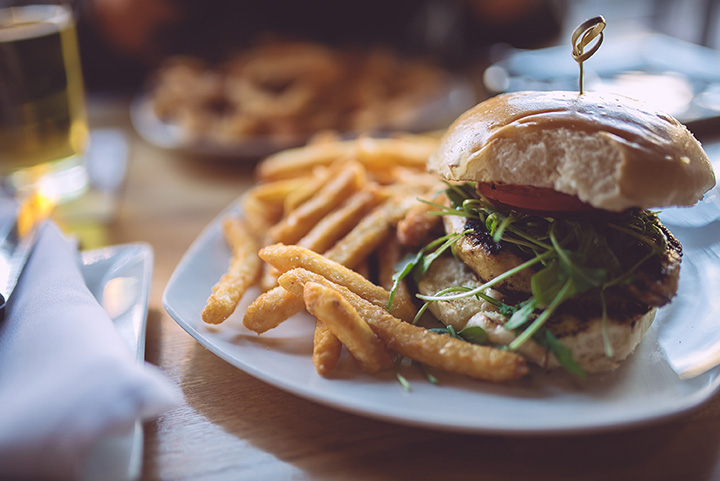 Brace yourself for the monster Brown Bear Burger, offered up at the Brown Bear tavern in Shelby. This beauty features not only burger, but also ham, onions, peppers, mushrooms, lettuce, tomato, and a complete mix of cheeses. Staggering? Better believe it at the Brown Bear. Though this isn't near as big as the Fifth Third, it's still going to be the kind of thing that will fill up just about any appetite.

Naturally, breweries that offer food commonly turn to burgers, and for the Grand Rapids Brewing Company in Grand Rapids, that means some unusual new twists. Perhaps the oddest of the odd twists here is the Peanut Butter & Jelly Burger, a hamburger that boasts jalapeno jelly along with its peanut butter. Served on toast cut diagonally, it's a very grown-up twist on a childhood favorite that many still enjoy as adults.

When you go to a place called Freakin' Unbelievable Burgers—located, perhaps not surprisingly, in Flint with a second location in Louisville, Kentucky—you expect a burger that's ahead of the ordinary. Freakin' Unbelievable is likely aware of the onus placed upon it, and has thus taken steps to present some truly innovative burger options. The All Day Brunch Burger might be one of the oddest names that ever made sense, as it boasts fried egg and bacon with roasted garlic and onion jam, allowing brunch from a burger.

With Slabtown Burgers' offering, Traverse City has made it on the list once again. Slabtown Burgers offers up a surprising combination of hamburger and fruit called the TC Cherry Burger, a burger made with, you guessed it, locally-grown dried cherries. Also included are blue cheese and grilled onions, a combination which is said to be shocking, yet tasty.

Head to Ashley's in Ann Arbor to take on the Badger Burger, an enormous slice of burger goodness boasting some of the most standard ingredients you'll ever see: bacon, cheddar, lettuce and tomato on an onion roll. It may sound uninspired, but the combination of simplicity and volume—most call this a massive burger by general standards—but it's going to be a knockout when you try it.

When GQ Magazine takes notice of a Michigan burger, it's likely a good idea to take notice. This particular burger is the Stella's Burger, a burger stuffed with cheese and served therein. While it's been a couple years since GQ's deputy editor Michael Hainey handed out the honor of “Best Burger in America” to Stella's, reports suggest that it hasn't fallen off any. Stella's itself offers other notable features, like a whiskey selection of over 250 bottles strong as well as a complete video arcade, making it a real draw.

There are several locations of the Old Detroit Burger Bar, but they'll have plenty of burgers in common. Go to the one in Baldwin and try the Burger Island, a burger that draws on one great Detroit classic: The Coney dog. No, there's no hot dog in this burger, but it will feature both cheese sauce and Coney sauce, and both in sufficient quantities that the restaurant recommends using a knife and fork to chow down on this half-pound beauty.

It may sound ludicrous to point out a hamburger on this list that's just called “hamburger,” but this no-frills offering from the West Pier Drive-In in Sault Ste. Marie has a lot to recommend it. This little beauty has found itself on two best-of lists, one from MLive and one from Movoto. Featuring an 80-20 blend of lean and fat ground beef, grilled on a flattop grill, the West Pier Drive-In burger is often cited as one of the best of its craft. Served on coffee filters, these simple, unassuming burgers served within easy view of the Soo Locks and the bridge to Canada have won a lot of fans.