The 9 Best Doughnut Shops in Michigan! 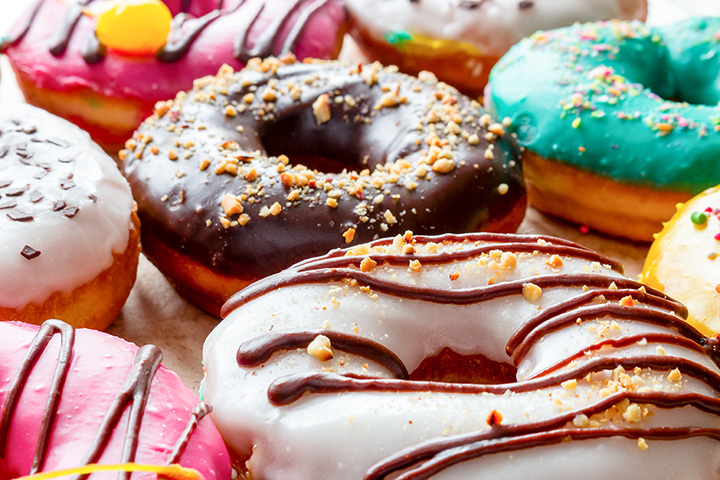 Ah, the doughnut. Nature's perfect breakfast food. Tasty, portable, and goes great with coffee, the doughnut has given us a lot of fast morning breakfast capability over the decades. In Michigan, there's plenty of love for the doughnut, and lots of great places to get them. So, grab a cup of coffee, settle in, and let's check out 9 of the best options for doughnuts in Michigan!

Sweetwater's in Kalamazoo is something of a Michigan institution, as measured by the sheer number of places that stock Sweetwater doughnuts as part of everyday operations. Open constantly—seriously, it's a 24/7 operation—and packed with a staggering array of options, there's no way to leave Sweetwater's unsatisfied, unless you're not taking some home with you.

Since the loss of Propaganda Doughnuts in Grand Rapids, probably some of that traffic has migrated to Marge's Donut Den in Wyoming, a doughnut shop that delivers some of the best around, and has done so for the last 40 years. Currently in the running for “Sweetest Bakery in America,” Marge's enormous array of doughnuts is so diverse that they will actually put together custom doughnuts based on your special occasion of choice. They'll even consider completely different items just for the challenge of it.

Another Vicksburg staple, Mackenzie's Bakery is known for a variety of offerings, from breads and muffins to the Mound, a brick of chocolate cake topped with buttercream icing and then dipped in chocolate, which hardens around the mass. Not surprisingly, this is also a big stop for doughnuts in Michigan, as this third-generation bakery shows off how to make a real powerhouse of a doughnut.

Just outside of Lansing in Williamston, Groovy Donuts represents one of the biggest names in doughnuts in the area. Describing itself as an “old school throwback retro doughnut and coffee shop,” Groovy Donuts' focus is, clearly, on the doughnuts. Featuring nutty doughnuts, as well as some noteworthy season-appropriate designs—Groovy Donuts' recent Easter celebrations featured egg-shaped doughnut holes and doughnuts alike along with rabbit-shaped doughnuts—there's a lot to like for a quick breakfast or a relaxing morning newspaper read backed up by some amazing pastry.

Though Yoder's offers a lot more than doughnuts to the folks of Centreville, it's still worth a mention for the sheer spectacular nature of the doughnuts in question. Featuring fritters, glazed doughnuts, chocolate peanut butter doughnuts and most everything in between—check out the maple bacon doughnuts, easily the size of a man's hand, for a real exercise in sweet excess—Yoder's Country Market will not only be able to take care of breakfast, but also lunch and probably dinner under one roof.

That's a massive name for a doughnut shop, but Peace, Love and Little Donuts of Traverse City will make up for its mouthful of exposition by providing equally impressive mouthfuls of doughnut. Start with a doughnut built around Fruity Pebbles cereal and work your way up from there. Customization abounds here, as this place will even put together custom doughnuts to match your school colors for a graduation party. Order such customization two weeks in advance, though, as it's not always easy to put this sort of thing together.

Muskegon's Ryke's Bakery—though there are actually several locations involved throughout the state including the most recent in Grand Haven—is widely known throughout Michigan and even parts of the immediate area for its array of culinary options. Its bakery items, however, might be the biggest draw. From the Bavarian crème to the Texas-Sized, a host of options are on hand for the diner to enjoy.

Don't think—or should we say doughnut think—for a minute that the Upper Peninsula isn't in on the whole doughnut affair too. For Marquette doughnut fans, the place to go is the Huron Mountain Bakery, featuring a wide array of doughnut options. From the simple apple fritter to something called a Raspberry Bazinga, there's plenty to choose from here and keep your sweet tooth happy.

Ann Arbor is home to the ultra-versatile affair known as Dimo's Deli and Donuts. Home to hot coffee, fresh doughnuts, and all the best in sandwiches, it's a great place to end a morning and start an afternoon. Featuring both “regular doughnuts” like the butter crème and chocolate frosted as well as “fancy doughnuts” like the crème long john and the apple fritter, the doughnut options come are vast. Being able to walk out with a sandwich for lunch on top of it makes it not only tasty, but super efficient.