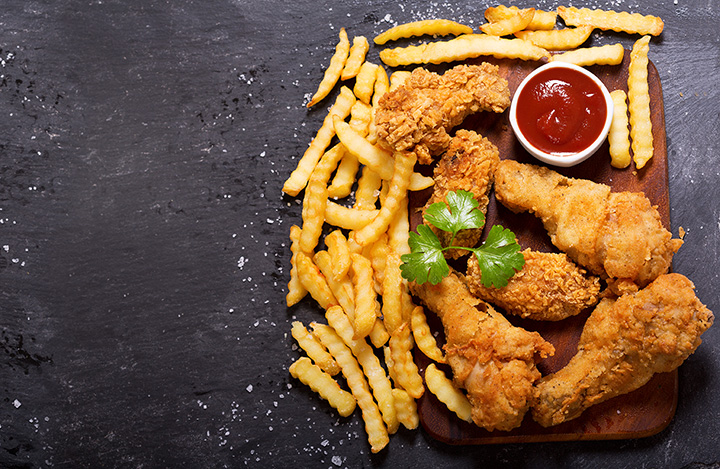 Michigan loves fried food. Seriously, if you don't believe it, just go to most any county fair where they'll fry for you pretty much anything. Years of trial and error has produced some amazing fried options in this state. So whether you’re craving fried fish, fried asparagus or a fried bologna sandwich, find it in Michigan. Here are the best places for fried deliciousness in the state.

Detroit's Golden Phoenix serves the standard array of Chinese food options, but there's one point in here that makes it unique. Known as almond boneless chicken, it's a Detroit institution, and the Golden Phoenix is said to be the best place to get it. It's mostly what the name implies—chicken breasts, deep fried, cut in thick slices, and served on a bed of lettuce under a dark gravy. Almonds and scallions top it off, a breed of fried chicken you may never have even seen before.

Nu Wave locations can be found throughout a large swath of Michigan, including Southfield, Lansing and Detroit. Once you find one, however, prepare for a fried food bonanza that will rival Long John Silver's itself. As the name suggests, fried fish and chicken are on hand here, but so too is fried okra, fried mushrooms, fried onion rings, fried cheese sticks and more. Given that Nu Wave has been operating for 18 years now, it's a safe bet you'll find fried food done right here.

How is a sushi place home for fried food? Perhaps some have considered the word “tempura” and are now wondering what we’re driving at. Blufin is home to both tempura cheesecake and tempura Oreos, which also boasts vanilla bean ice cream and raspberry puree along with the fried cookies. Oh, and you can get your sushi on beforehand, if you're so inclined. Or just skip right to a spectacular fried dessert.

Another once-a-year phenomenon, you'll be able to hit the National Asparagus Festival in Oceana County to try some deep-fried asparagus. Interestingly, that's just for starters, as you'll see asparagus presented in a host of ways, including soup and burritos. But if you've ever wondered about a plate of deep-fried asparagus, your best bet to find it is at the festival that bears its name.

Zingerman's Roadhouse in Ann Arbor is known for a lot of reasons, but one of the best new additions to its menu—based on the sheer number of folks clamoring for a taste of this dish—is the fried cheese curds. They're huge in Wisconsin, but not always so readily available in Michigan, at least until Zingerman's Roadhouse took matters into its own hands. It's an off-menu item, so availability can be a bit limited, but if you can get them, they're worth it. Made with Sprecher's Pub Ale in the batter and served with jalapeno ranch, you'll likely love this slice of fried gold.

Grand Haven sandwich shop the Toasted Pickle lives by one maxim: If you find yourself in a pickle, eat your way out. Hard to fight that, but this is also home to one great fried delicacy: the fried pickle spear. Spears of pickle wrapped in a thin layer of dough, fried crisp, and served with the house's “kickin' pickle sauce.” Best of all, you can have it alongside your choice of sandwich or salad to round things out and make a full meal of the experience.

Those eager for another slice of fried dessert will want to hit Battle Creek's Station 66. While it's got some wonderful options for ice cream, it's the fried desserts that should catch attention. Not only are there donuts, commonly a fried food, but the real winner here is the Fry Pies. Fry Pies are basically made like actual pies, though tucked into a kind of pocket, whereupon they're deep fried and glazed. Since they're made with local produce as well, you can feel downright virtuous about your fried treat for supporting local agriculture.