Best Pizza in Michigan: Our 9 Favorites! 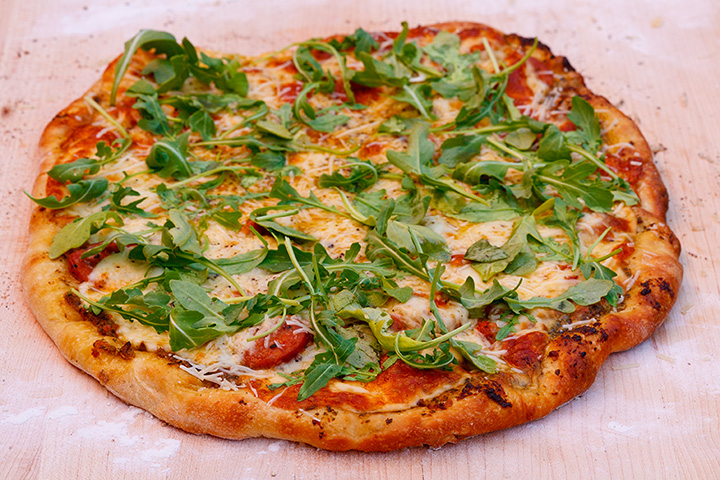 Michigan is a place that's made for pizza. Having a party in the summer at the beach, near a pool, or in your own backyard? Get a pizza! Is it Thursday? Get a pizza! Are you hungry? Well, you get the idea. Pizza restaurants across Michigan serve up remarkable excesses of toppings, densities or preparation, and some are just sources of good pizza. So, for your hearty food craving, settle in and run down this collection of 9 great pizza restaurants in Michigan!

Grand Rapids' Mitten Brewing Company is known for its great beer, but it's also got an edge in pizza that's hard to beat. Those familiar with breweries likely already know about a flight of beers, a small tray of beers in shot glasses, allowing drinkers to try several different tastes at once, but Mitten Brewing Company actually offers a pizza flight, where users can try six different pizzas at once. One such option is the heart-stopping Westerdog, which features hot dog slices, bean chili, pickles and onions.

Detroit-style pizza is an unusual refinement of Chicago style, a kind of deep-dish pizza served square and cut in squares with a particular layering of toppings. One of the best places to find such pizza is Loui's in Hazel Park, which beat long-time favorite Buddy's in recent polling. So for a shot of the new royalty in Detroit style, give Loui's a shot.

It's not a surprise that South Haven has plenty of pizza options. When you're right on the lake like that, you kind of have to accommodate all those beach goers. The best—and winner of a Certificate of Excellence on TripAdvisor—has to be Maria's Taste of Italy. Ranked best in pizza, and third out of 50 possible restaurant choices in South Haven overall on TripAdvisor, Maria's boasts a complete range of Italian foods from manicotti to lasagna and of course pizza. Throw in some drink specials—recently the place got in Crane's Hard Cider on tap—and the reasons to check out Maria's climb.

A long-time favorite, and personal favorite, Cavoni's in Three Rivers—formerly of Centerville before a recent move—is owned by a family that's long been associated with pizza in Michigan, the Mancinos. Offering pizza, calzones, pasta and a variety of other dishes, this small pizza place is a resounding winner with locals, offering business and factory delivery of its many tasty entrees.

Out in Lexington, pizza buffs can try a staggering range at the Water Tower Sports Pub. The standards are in attendance, but one pie worth pointing out is the “Three Little Pigs,” noted for its abundance of pork subtypes—bacon, ham, and a house-made smoked pork—as well as mildly sweet sauce possibly meant to evoke barbecue taste. That's a great start, and throwing in several Michigan craft beers—get a growler to go if you prefer—and the result is clear.

In Michigan, pizza tends to run closer to the Chicago style than the New York, and those who want a deep dish that will bend the server head to Cugino's in Grand Ledge. Featuring an additional 10 varieties of pizza beyond that, as well as the ability to make your own pizza and a slate of other foods besides like calzones, Cugino's offers a slate of pizza selections on par with the best.

Head back to Grand Rapids for another slice of noteworthy pizza at Licari's Sicilian Pizza Kitchen. This particular stop will, naturally, do all the standards and quite well, but there's one there that's a special family recipe. Called the “Sfinciuni,” this boasts a half-sheet-pan of dough with Parmigiano-Reggiano chunks throughout and rounded off with a thick sauce that trends toward the sweet, making it a comparative rarity in the field worth trying.

The Upper Peninsula loves its pizza as well. Just ask local musicians Da Yoopers who once immortalized Yooper pizza with their song “Pizza in my Shorts.” One of the great examples of Yooper pizza comes from Ishpeming's Congress Pizzas, where one of the strangest ingredients can be had: Cudighi sausage. Those unfamiliar with Cudighi sausage—heavily spiced and often featuring clove and cinnamon—should note it was originally Italian, but after its migration to the Upper Peninsula is now one of the only places on Earth to get it.