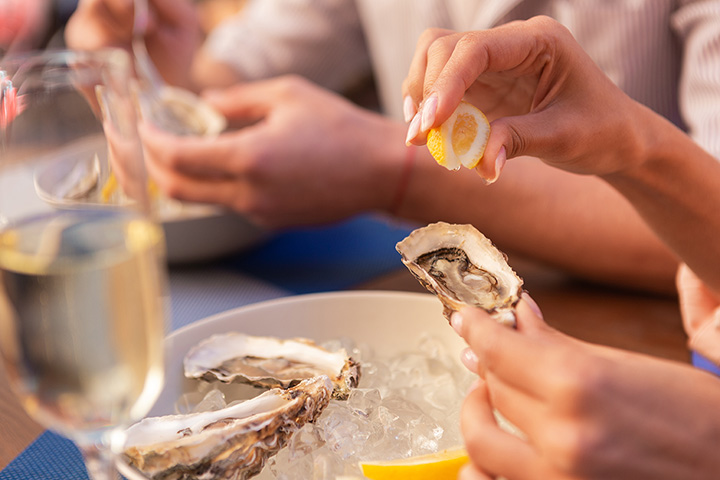 Bordered by Lake Erie, Lake Huron, Lake Michigan, and Lake Superior, and sprinkled with all kinds of lakes and rivers in between, it shouldn’t surprise that Michigan boasts some breathtaking waterfront restaurants. Looking to dine on a sizzling steak backdropped by a cascading waterfall? How about indulging in fresh crab along the St. Clair River? You can get all that and more at these 10 beautiful restaurants by the water in Michigan.

Tahquamenon Falls Brewery & Pub, in Paradise, isn't far at all from one of Michigan's greatest water-based landmarks: Tahquamenon Falls. One of the largest waterfalls in the United States, this natural wonder draws visitors from all over. At the brewery and pub that bears its name, meanwhile, diners can try a range of craft beers—there's a blueberry ale that's especially noteworthy; check with the restaurant as to availability—and a variety of dinner options from steaks to locally-smoked fish and beyond.

The River Crab Restaurant, on the St. Clair River near St. Clair, actually has a spot on OpenTable's list of America's 100 Most Scenic Restaurants. That's enough to net it a real distinction in a state where there's plenty of waterfront dining available, but the food steps things up a notch still further. Whether you're coming for a prix fixe menu or one of River Crab's many standalone dishes, you'll be able to satisfy your craving for everything from steak to seafood to crispy duck right here.

The Waterfront restaurant in Wyandotte overlooks the Detroit River, and lands a slot on the list for actually having the word “waterfront” right in the name. It doesn't get more on-the-nose than that, and the available meal options will likewise hit the spot. Pizza, pasta, chicken, steak and more all combine to create a range of options that should satisfy just about any taste. If you've never tried deep fried brussel sprouts before, this may be the perfect time to do so.

Breakfast, lunch and dinner, all on the shore of Lake Cadillac. That's exactly what you're in for at Burke's Waterfront Restaurant in Cadillac. Weekends and holidays feature an all-you-can-eat brunch perfect for those who like to kick off a weekend with a monster breakfast. The standalone menu items, meanwhile, run the gamut from steaks to comfort food to burritos and more. Throw in a children's menu and everything that makes up breakfast, lunch and dinner options and Burke's will cover the waterfront as effectively as its name does.

Boatwerks Waterfront Restaurant in Holland set up shop right near Lake Michigan, one of Michigan's biggest and most well-known water features. Before you go, check out the live weather cam that will show you exactly what the world looks like around Boatwerks. Then, when you've spotted some pleasant weather and accompanying scenery, head on out to try burgers, salads, and such unusual items as the Marcona Almond Whitefish or the Mojo Pork in pineapple salsa, avocado lime yogurt and basmati.

A little ways south of the Boatwerks, in St. Joseph, you'll find the LakeHouse Restaurant and Bar, with some outstanding views of Lake Michigan and the surrounding Sunset Coast, as it's sometimes called. With daily specials and some amazing entree options—Jurassic Park fans, check out the Chilean Sea Bass—you'll have just about everything you could ask for here. It's the venue space that really sells this one; the LakeHouse Tent, as it's known, has seating for up to 150, complete with fans and bistro lighting, offering up a unique outdoor experience.

On the shores of Portage's West Lake is a comparatively new addition to Michigan's waterfront dining scene: Cove Lakeside Bistro. It's got an incredibly wide-ranging slew of options for dining, with menus available including lunch, dinner, weekend brunch and large parties. There's even an entire dessert menu which features such tasty treats as Pineapple Upside Down Cake and White Chocolate Bourbon Bread Pudding.

The Marina Grand Resort in New Buffalo plays host to the Bentwood Tavern, which is contained entirely within the resort. Home to “a sophisticated spin on comfort food,” this waterfront establishments boasts some exciting options. Whether it's salmon, chicken, or steak you're after, you'll have options for it right here. Perhaps the real draw, however, is the wood-fired pizza selection, which includes the Margherita standard as well as such exotic choices as the Prosciutto and Fig.

In part of the ongoing quest to prove that Traverse City has absolutely everything, once again, it's contributed an item to this list. The Boathouse capitalizes on its location near Bowers Harbor to show off some dazzling waterfront views, and its summer deck certainly doesn't hurt matters any on that front. Meanwhile, the menu boasts bar menu and full dinner options as well as a Sunday brunch, making it a great choice for anything from a special occasion dinner to cocktails by the fireplace. There's even a farm-to-table selection showing, in nautical miles, the distance the food traveled.

The Waterfront in Coloma is unique for one main reason: it's been open since the 1940s, reports note, and it's also the last surviving restaurant on Paw Paw Lake. Weekly specials, a Sunday brunch and a slate of special lakeside events lend it an extra touch and demonstrate how it survived the devastation that took so many other eateries down. There's an entire menu devoted to martini selections, and as for the regular menu, steak, pasta, chicken, seafood, and a daily dessert assortment round out this robust package.