The 11 Best Festivals in Michigan! 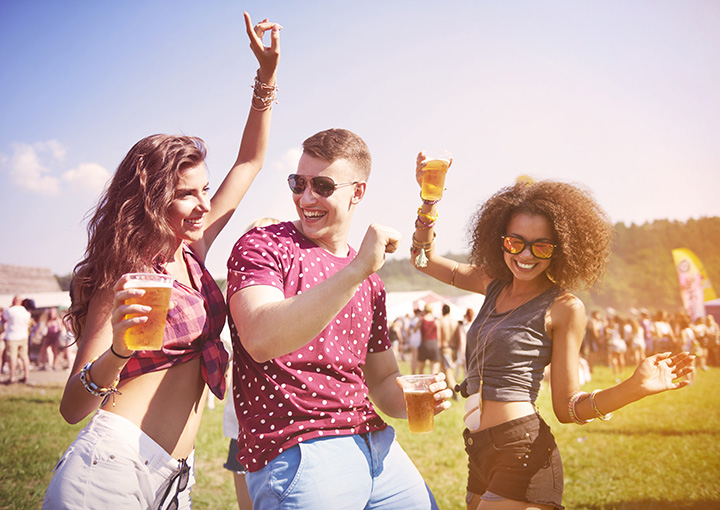 There is plenty of fun to be had at one of Michigan’s excellent festivals. Ranging from flower fests, to celebrations of ice sculptures, to tator tots, Michigan will keep you entertained with its calendar of festivals lined up. For those eager to check out something truly special, you’re in luck, because Michigan will give you just that. Here are 11 great festivals in Michigan.

Easily one of the most famous of Michigan festivals, Tulip Time in Holland celebrates one of Holland's greatest exports and the cause of one of the earliest economic bubbles: The tulip. Featuring parades, concerts, and locals in native Dutch dress—along with the traditional Dutch Dance—Tulip Time is a great time to get in touch with a slice of Dutch heritage, whether you're actually from the Netherlands or not.

Every spring, flower enthusiasts turn joyfully to the brief yet explosive lilac season, in which masses of the short-lived plants burst into fragrant bloom and effectively banish a Michigan winter for another year. The Mackinac Island Lilac Festival, meanwhile, instead delivers on sheer length, running for about 10 days annually. Featuring a 10K run, a set of horse-drawn carriage tours, the Taste of Mackinac Culinary Event and the crowning of the Lilac Festival Queen and Court, there's plenty to look forward to on this island.

It's no surprise that some of Michigan's greatest festivals revolve around cars thanks to the great history that Michigan has with the automobile. In Detroit, however, it gets a little bigger than that as, on one weekend a year, Detroit plays host to some of the biggest names in the Formula One circuit with the Belle Isle Grand Prix. For a town normally known for NASCAR, this is a fairly big event in an unexpected location.

We don't mind telling you that Michigan blueberries are some of the best around. Delicious and sweet, there's no wonder why Michigan folks love celebrating blueberries. South Haven puts on a wonderful event featuring pancake breakfasts—involving blueberries, of course—but also pageants, a 5K and 10K run, and a complete parade. What's more, South Haven isn't alone in Blueberry Festivals. There's one in Marquette, one in Imlay City, and if you're willing to expand to wild blueberries, Paradise will chip in an event as well.

Festivals don't just celebrate flowers or ice. Sometimes festivals are all about movies, and for one of the biggest such events around, the Ann Arbor Film Festival in Ann Arbor will provide. Featuring dozens of short films and feature-length films alike, along with galleries, Q&A sessions, and a host of other events—it's where Vin Diesel's career really got started, reports note—there will seldom be a shortage of exciting film fare on hand.

Springtime is mushroom hunting season for a lot of folks in Michigan, and in Boyne City, the National Morel Mushroom Festival is the ultimate celebration of these tasty fungi. Always held the weekend after Mother's Day, and held every year for nearly six decades, the event features special morel-based dishes from local restaurants as well as singers from the local arts community getting together to wax lyrical about this tasty treat.

Before the apples, before the blueberries, and even before the strawberries, there's a crop that comes on in Michigan that doesn't always appeal to the kid in you: asparagus. In Hart, however, that's a different matter, and Hart celebrates its crop in grand style with the National Asparagus Festival. Featuring the crowning of the Asparagus Queen—who then travels Michigan to promote agriculture—the seemingly obligatory 5K run, a food show, an arts and crafts fair and more, it's all about the asparagus at this event.

Essentially a kind of Michigan-based Burning Man—the Great Lakes Region's “official Burning Man Regional Event”—this event in Rothbury is an artistic celebration much in the same style as its parent event, Burning Man. Lakes of Fire offers open camping as well as theme camps, and an opportunity to engage in the same bizarre, exciting fun that its parent event offers.

It shouldn't surprise anyone that Michigan has a connection to lumberjacks. While it's mostly about farming out here, trees are a crop that can be farmed too. So in Wolverine, a celebration of the lumberjack takes place with live entertainment, a parade, a chicken dinner—half an entire chicken, two side dishes, a roll and a drink for $9—and even fireworks. The local fire department will offer up a water ball contest, ponies will engage in feats of strength in the pony dynamometer competition, and there are even canoe and kayak races on hand.